Do you know the difference between Chianti and Chianti Classico? - Fattoria Montecchio
× 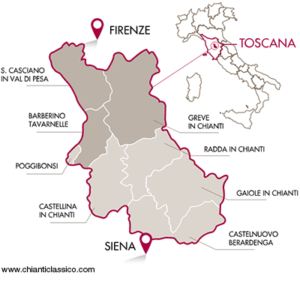 Do you know the difference between Chianti and Chianti Classico?

As far as getting into Italian red wine Chianti seems like a great place to start.

Not only it is made up of the most important grape in the country’s history – sangiovese (we’ll talk about this fabulous grape in a next post!) –  but it comes from a region that’s absolutely steeped in Italian wine history: Tuscany!

“Chianti” and “Chianti Classico” are actually two different and separate DOCGs, both from Tuscany, but they have different disciplinary,  production area and protection consortium.

Let’s try to get into specifics and understand exactly what changes across these two wines.

In 1716, Cosimo III De Medici , the Grand Duke of Tuscany, defined the geographical boundaries most suited for grape wine production in the region.

Among these areas, the Chianti territory was clearly identified. At that time there was only Chianti, produced in the region of the same name.

The need of distinguishing the two appellations, Chianti and Chianti Classico, emerged only afterwards.

In the twentieth century the demand for Chianti wine was so high that it was also produced in the neighboring territories, outside the borders established by the edict.

The producers of the original area decided to protect themselves, first by founding a Consortium in order to defend “their” wine from imitations and then by fighting to get a distinctive denomination.

Their efforts were rewarded in 1932 when a ministerial decree recognized to the wine produced in the original Chianti area, the one established by the Medici’s decree, the possibility to use the attribute “Classico”, differentiating itself from the Chianti of the neighboring areas.

If we go back to the famous edict from Cosimo III, the area he originally delimited was called “Classico” because it was considered the best place to cultivate vines.

Moreover, only the Chianti Classico is associated with the historic Black Rooster trademark

The map below will make you understand immediately the areas of reference.

As you can see, Chianti areas are scattered among Florence, Siena, Arezzo,Pisa whereas Chianti Classico is a central part of these areas, much more restricted and homogeneous.

The Chianti Classico zone is extremely limited in comparison to the vast stretches of the Chianti more broadly.

The territory, however, is not the only difference between Chianti and Chianti Classico.

Important is also the disciplinary, that is the regulation that the producer must respect in order to get the reference certification.

Both wines are mainly made of Sangiovese grape , however, whereas in Chianti it is required a minimum of 70% of Sangiovese, in Chianti Classico this value increases to 80%.

A wine (Chianti or Chianti Classico) can also be Sangiovese in purity. Often the blend is made with Cabernet Sauvignon, Merlot, Syrah, Canaiolo or Colorino.

But that is not all, in fact we can have:

Without going into details, the “basic” Chianti Classico, so to speak, is the one that must have at least 12 months of aging.

For Chianti Classico Riserva, the aging time is increased to 24 months.

Chianti Classico Gran Selezione is the cutting edge, as it is produced with grapes coming from a single vineyard or from a selection of the best grapes with a minimum aging of 30 months.

BTW… do you know the legend about this historical symbol of the region?
read the article now >