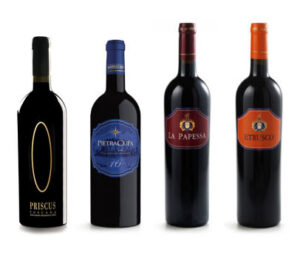 What does Super Tuscan really mean?

Super Tuscans  are  revolutionary wines:  they don’t respect guidelines and are a brand new idea.

The name “Super Tuscan” was coined in the early 1980s to describe a red blend from Tuscany.

In a broader interpretation, tend to be considered Super Tuscans all the wines of Tuscan  region which for any reason (geographical area, yield, vinification and / or maturation methods, etc …) do not fall within the relevant disciplinary which regulate the production of the corresponding designations of origin.

They don’t respect any of the disciplinary of the DOC or DOCG (Denomination of Origin Control and/or Guarantee) and they are produced totally… with no rules!

Practically, they are made blending the traditional Sangiovese with wine grapes that are not non – native or typical, as well as Cabernet Sauvignon, Syrah, Merlot.

How are Super Tuscan born?

The story begins with the courage of some Tuscan producers, who, challenging local legislation and the distrust of consumers, have managed to create an imprint, a reference point for Italian wine and a style that has become a cult all over the world.

Around 1940, the Marquis Mario Incisa della Rocchetta , passionate about racing horses and French wines, decided to fulfill the dream of making a wine that was also “purebred”. After noticing geographical and climatic similarities between the Tuscan Maremma area with that of Graves (Bordeaux), he imported some clones of Cabernet Sauvignon and Cabernet Franc; these grapes were planted in Tenuta San Guido and after careful and careful cultivation, in 1942 the first bottles of Sassicaia were ready . At the beginning the wine was produced exclusively for family consumption, while the first harvest to be marketed came only in 1968.

Inspired by this example, the Marquis Piero Antinori (cousin of Mario Incisa della Rocchetta), whose family had been producing wine for over 600 years, decided to go further and modified the winemaking process of his Chianti, adding to Sangiovese (the typical local grape and most emblematic Italian grape) a blend of Cabernet Sauvignon and Merlot. Thus was born the Tignanello , which can be considered the first true Supertuscan with Italy in the pedigree, since Sassicaia was an assembly of French grapes only.

The definitive consecration of the genre came when the famous American critic Robert Parker, in a blind tasting, attributed 100/100 points to the 1985 Sassicaia!

From then on, the idea of producing in Tuscany wines mixing Cabernet Sauvignon, Merlot or Syrah with the traditional grape of the region was soon seen as an good and valid idea, and from that time onwards, several producers began to imitate this style and opened the way to a new history in Tuscan and Italian oenology.

These great wines, since they are produced with grapes not allowed by the disciplinary, could not be classified as DOC (Denomination of Controlled Origin) or DOCG (Denomination of Controlled and Guaranteed Origin). Initially, therefore, they were labeled simply as “vino da tavola”  or “table wine”, the  definition typically reserved for the lowest quality wines in the pyramid of the  Italian wine classification .

Therefore, a paradoxical situation had arisen in which in the same classification “Vino da Tavola” there were very simple wines , even sometimes rough !,  and great wines that would be the envy of the most noble French chateaux.

As these wines from within and beyond Chianti punched well above their lowly Vino da Tavola status, international critics, enthusiastic about these new wines, began to call them Super Tuscan , precisely to distinguish them from other lower quality reds that bore the wording “table wine” on the label, overcoming any possible misunderstanding.

At the same time it has become synonymous with a style of wines that go beyond tradition and are also appreciated internationally.

The introduction of the IGT appellation

To solve these new paradoxes of Italian oenology , later has been introduced the appellation IGT  – Indicazione Geografica Tipica –  which indicates a wine from a specific region.

This definition  was created specifically to recognize the quality of these ‘outsider’ wines.

If you want to create a Super Tuscan, however, you can’t just mix Sangiovese with other types of grapes. What characterize these wines are also the story of their vineyards, their soul and the territory where they were planted.

In a nutshell, if you want to know what a Super Tuscan is and what’s the difference between a Chianti Classico and a Super Tuscan, you have to taste it by discovering and interpreting the place where it has been created. You have to talk to the people who made it, know their story and the story of the soil where the vineyard is set.