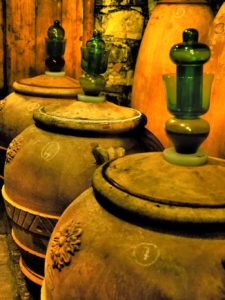 The title of the meeting held in the suggestive venue of the Chalet Fontana, in Florence, was ´Antique materials in architecture and their use in certain winemaking procedures´. The special speaker was Architect Massimo Ricci, expert in monument restoration for the UNESCO forum ´University and Heritage´, University of Valencia and dean of Florence University in technology of architecture, who oversaw for the Fattoria Montecchio and the Antica Fornace, the production of amphorae in ´cocciopesto´ in various forms and sizes, used for the vinification and which gives similar results to wines aged in barriques.
But how can we couple antique architectural technology, mostly used in the restoration of monuments, with winemaking procedures? Professor Ricci posed himself this question in order to reach his understanding of why the use of amphorae in ´cocciopesto´ and terracotta were and still are used in making wine.

On studying the mortar used in construction and reparation problems, he came up with the right material suitable to hold and age wine. In particular his studies focused on Roman ´cocciopesto´ and after some time he found the same mixture used by the Romans in the first century AD, which as well as not being – obviously – harmful to man – had no influence on the taste or aroma of the wine. This allowed the wine to develop its characteristics naturally throughout the entire procedure. His studies also discovered that a width of clay or ´cocciopesto´ of five- six centimetres was the best to get optimal results.

Hence we have a winemaking method that returns from the past – just think, it is the second most antique material used after animal skins, and now it´s gaining popularity by the day. International and Italian oenologists have recently been looking into new and interesting materials to put alongside traditional ones, such as wood for the ageing process. Which explains why so many wine makers showed such great interest in the terracotta casks at the Vinitaly Fair last April.
The vinification and refinement of wine in terracotta began at Fattoria Montecchio about three years ago, when the oenologist, Stefano Di Blasi, decided to try out this new method of vinification in a somewhat empirical manner. He started by putting grapes directly into very large terracotta jars. Only later, thanks to the advice given by Professor Ricci who happened to be present, did the Fattoria Montecchi decide to specially make a series of terracotta containers for the vinification and refinement of wine in its own ´Antica Fornace ´ furnace.
These amphorae are about one and a half metres tall, made with the ´colombina´ technique (placing ring upon ring of clay) and is gradually built by adding not more than 10-15 centimetres each day. This creates a solid structure with differing levels of pressure.
One last element we should not underestimate is the economics: a terracotta amphora costs little more than a wooden cask but it lasts a great deal longer.
Priscus, the pure Sangiovese wine, which bears the name of a Roman gladiator, was born just this way. It is a particular wine with intense colour, strong structure and high tannin content. This is due to the 7/8 month long vinification and refinement that takes place inside terracotta.
Back to posts list
This site or third-party tools integrated into it process personal data (e.g. browsing data or IP addresses) and make use of cookies or other identifiers necessary for operation (only technical and analytical cookies). The site also allows third party cookies to be sent. By clicking here it is possible to read the extended privacy information, with indications on the use of technical and analytics cookies.OkPrivacy policy