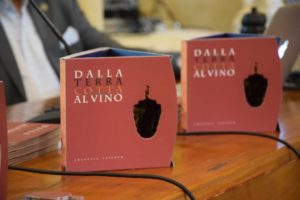 From terracotta to wine: the case history of the Fattoria Montecchio

The participants who took part in the conference of ´From terra(cotta) to Wine´, proposed and organised by the Fattoria Montecchio, were all qualified enthusiasts. In the elegant tasting room of the Fattoria, authoritative speakers spoke about the ever more popular theme of vinification in terracotta amphorae.
The starting point was the case history of the terracotta vinification project of Fattoria Montecchio and the book on this same subject by the journalist and sommelier, Emanuele Vescovo. The title of his book on this project is the same as the title of the conference: ´From Terra(cotta) to Wine´.
The particular importance of this wine farm is that they have their own terracotta furnace on their estate, and this enables them to make terracotta jars and amphorae specially created to produce the best results in terracotta vinification.
Montecchio is in an area that has always been central to terracotta production, just as Impruneta, which is a few miles away. The antique furnace, which dates from the nineteenth century, was restored by Ivo Nuti in the nineteen nineties, so as to revive the Tuscan tradition of ceramics and terracotta. This tradition dates back to the Etruscans, as Greek and Roman frescoes, paintings and artefacts witness. The Montecchio furnace makes vases, jars, amphorae, statues and decorative objects in terracotta made in the traditional way and is a feather in the hat of the Fattoria Montecchio. In addition to this, Montecchio is in one of the best wine producing areas of Italy – thus the combination seemed a natural development.
Although there is no specific literature on terracotta wine making, it is interesting to follow the evolution of this method that appears to have started in Georgia as long as 5,000 years ago and was developed by the Etruscans at a later date as can be seen from the many Etruscan jars and amphorae that stored wine, and have been found by archaeologists.
The current project, thought up and supervised by the Fattoria Montecchio´s oenologist, Stefano Di Blasio, brought about the creation of jars and amphorae specially suited to obtaining the best results.Thanks to the collaboration of Professor Massimo Ricci, dean of architectural technique at the University of Florence, advisor to the University of Valencia on the restoration of antique monuments and also to the UNESCO ´University and Heritage´ project, the Fattoria Montecchio was able to re-discover age old methods of terracotta production such as the ´cocciopesto´, which enables the creation of terracotta products in all shapes and sizes, but also allows one to satisfy specific needs regarding the production of wine, enabling results that can be compared to vinification in wooden barrels and barriques.
This brain child of Stefano Di Blasio and the owner of Fattoria Montecchio aimed at creating a wine that truly expressed the wealth of what this part of Tuscany has to offer. Content and container are both fruit of the same earth: their union is total harmony. The resulting wine is Priscus, a pure San Giovese wine made only in terracotta.
The added value of the Fattoria Montecchio´s production is that the terracotta containers are all hand made; they may not have the precision of steel or the flavour of wood, but the resulting wine maintains the true taste, colour and structure of the grapes.The flavour reflects the individuality of each harvest, the unique characteristics of each vine type.
Seeing as terracotta allows a certain amount of air permeation, which steel and wood do not, the resulting wine is more fruity, better structured and is completely unadulterated.
The Fattoria Montecchio has decided to continue using the traditional vinification method, with wooden barrels and barriques, as it has done with success over the past years, and to add wine made in terracotta as an extra to their already prestigious selection of wines. This means that they can offer wines made of the same grapes, harvested the same year, but vinified in different ways.
Comparing them is well worth it for anyone who wants to go one step further than just enjoying a glass of good wine.