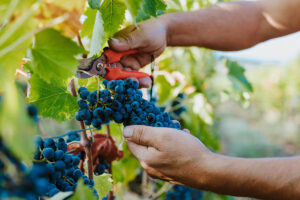 Red wine is made on the skins: red wine is made like white wine, but with one major difference: the juice ferments with grape skins to dye it red, generally in a tank or vat.

The skin contact in red wine production allows color, flavor and textural compounds to be integrated into the juice, while the yeast converts sugar to alcohol. The skins contain most of the good stuff that gives red wine its color, while the pulp mostly provides the juice. 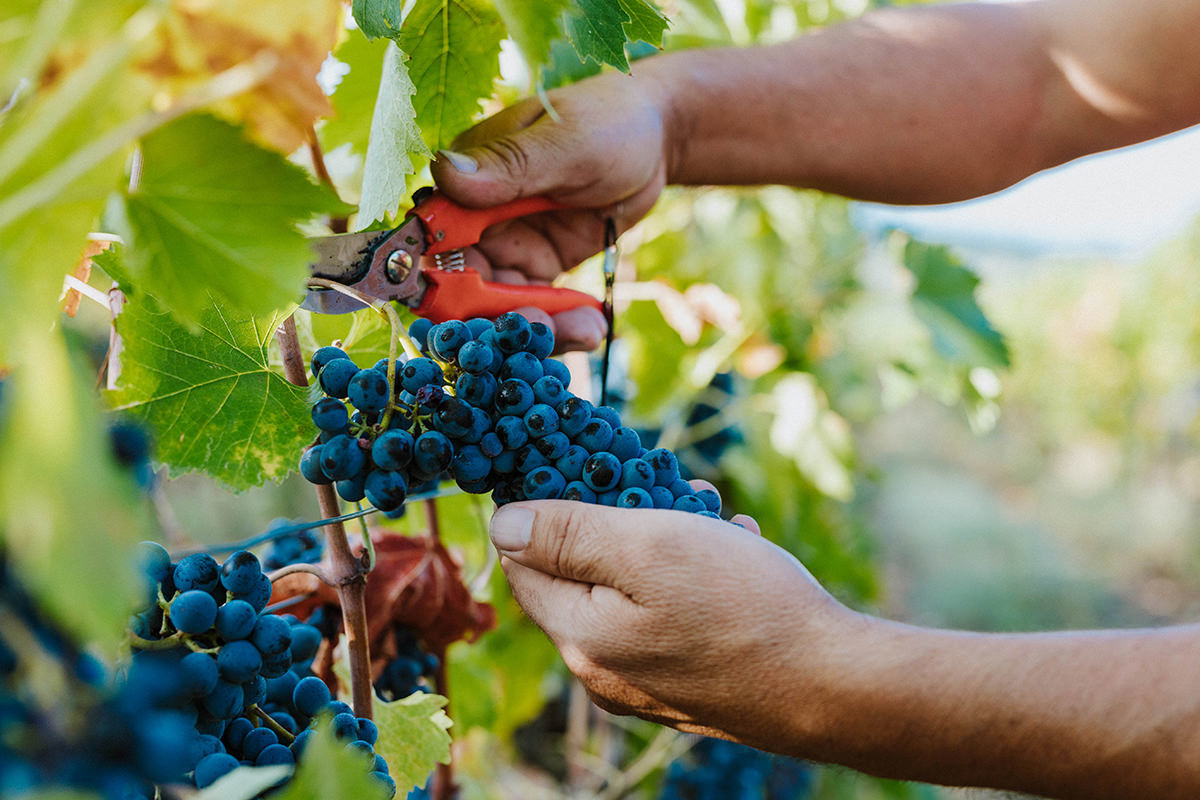 Red wine grapes are ready to harvest in late summer to early fall, several weeks after the initial green color of the grapes has turned to dark red or blue-black.

This period is called, in viticulture, veraison: this is the onset of the ripening of the grapes, when starts the change of color of the grape berries.

During the grape harvest, the most important thing to do is to pick the grapes at perfect ripeness: it is critical because grapes don’t continue to ripen after they’ve been picked.

For all winemakers, the grape harvest season is the most critical (and very tense) time of year!

Vineyard crews cut the grape bunches or clusters from the vines. That’s either done by hand or a self-propelled machine that shakes or slaps the grapes off their stems and collects the individual berries and juice.

After the harvest, grapes head to the winery. The winemaker decides whether or not to remove the stems or to ferment grape bunches as whole clusters.

This is an important choice because leaving stems in the fermentation adds astringency (aka tannin) but also reduces sourness.

During this step, grapes also receive sulfur dioxide to stop bacterial spoilage before the fermentation starts and to minimize oxidation.

The combined juice, skins and seeds is known as must. Some winemakers cool the must for a day or two, a process called cold soaking, to extract color and flavor compounds from the skins before any alcohol is created.

After this, some winemakers add commercial yeast to begin fermentation while others let the native yeast that clings to the grapes or exists in the cellar’s atmosphere start the fermentation. Either way, yeast cells come to life in the sweet solution and begin to convert the sugar into alcohol, heat and carbon dioxide. Most wines take 5–21 days to ferment sugar into alcohol. A cap of skins forms atop the must. This cap needs to be blended back into the juice at least once per day but often more during the fermentation process to keep it moist. This process releases carbon dioxide allows oxygen uptake, speeds extraction from the skins and manages the heat.

After the fermentation, vintners transfer the must into wine presses, which separate the skins and seeds from the wine and squeezes the skins to coax out what is known as pressed wine. Pressing the skins gives winemakers about 15% more wine! How hard to press the must is a key winemaking decision: too hard, and it brings out harsh tannins. Too soft, it might leave the wine lighter in color and texture.

As the red wine settles in tanks or barrels, a second “fermentation” happens: the malolactic fermentation. This process converts the wine’s tart malic acid and sharp to softer and rounder lactic acid.

Red wines age in a variety of storage vessels including wooden barrels, concrete, glass, clay. Each vessel affects wine differently as it ages.

The oak wood itself flavors the wine with natural compounds that smell like vanilla.

Clay tanks have a softening effect on wine by reducing acidity.

Of course, the biggest thing that affects flavors in red wine is time. The longer a wine rests, the more chemical reactions happen within the liquid itself.

Now that the wine is good and rested, it’s time to make the final blend. A winemaker blends grape varieties together or different barrels of the same grape to make a finished wine. Blending wine is a challenge because the winemaker can add complexity and perfect balance using his sense of texture on his palate instead of his nose.

Red wine is clarified during the maturation period by racking, fining and filtering. Sediments like yeast cells and tiny bits of grape skins settle out of red wine while it ages. When a red wine is mature enough to be bottled, many winemakers choose to filter it first. A coarse filtration removes extra sediment. A sterile filtration removes virtually all remaining yeast as well as microbes that might later spoil the wine.

A final adjustment of sulfur dioxide is often made just before a wine is bottled. Oxygen is removed from the empty bottles before they’re filled with wine, corked and labeled.

Today’s winemakers have many more options, techniques and technologies than their ancient predecessors. But the object is still the same: to take red grapes and allow yeast to transform them into an enjoyable red wine!!